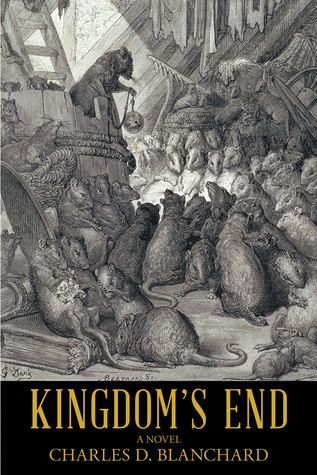 Indio, a wise blind mole rat, has led a prosperous colony of sighted rats in the ruins of an old, abandoned movie theater for most of his thirty years. But the head of colony security, an ambitious Norway rat named Matthias, thinks he can do a better job and schemes to make a power grab. Meanwhile, the city recognizes that it has a rat infestation problem and decides to wage war on them, ultimately setting its sights on the theater.

Blanchard dedicates this novel to Richard Adams for writing Watership Down. While that book got people to look at cuddly rabbits in a new light, Kingdom's End attempts to take an animal often looked upon as vile and detestable and shine a more favorable light upon it. He makes no attempt to gloss over the rats' culinary preferences or nesting habits, but through anthropomorphization he imbues some of them with more admirable qualities of honor and service to community.

The story starts off with a group of rats out on a foraging mission. We start with one rat, then segue over to another rat, who then meets up with another rat, and so on. The focus of the story shifts from one rat to the next as Blanchard introduces us to parts of their world. Some rats that appear early in the story don't re-appear until much later. It's a bit dizzying as I wasn't sure which rats were important to the overall story and which weren't.

The story is told from a universal omniscient POV, which goes above and beyond third-person omniscient. Not only do we know what all of the rats are up to, but the nameless humans they encounter as well. Blanchard tells us everything, relevant or not to the adventures of the rats. I found it odd that we would be told a human character's backstory but not their name. And there's a lot of telling that goes on with this form of narration. The foreshadowing comes in the form of prophesies from an old rat that lives near the river. We know what's going to happen, it's just a question of when. I realize that this is a more traditional form of storytelling, but I find that it goes too far and leaves less for the reader to discover on their own.

I don't know if many people will get past the ick factor to follow Blanchard down into the grimy world that the rats live in. When I described the book as "Watership Down for rats" to my wife, that's how she replied. We like rabbits; they're soft, cuddly, and cute. It isn't hard to make your reader care about their fate. That's far from an easy thing to do with rats. Blanchard succeeds to some extent; I felt pity for the rats that were cruelly struck down by the hazards of urban living, and I rooted for the good and honorable rats. But too often a misapplied narrative focus and the deafening foreshadowing cut into my entertainment of the story.