The Human and the Hunted by R.A. Burg 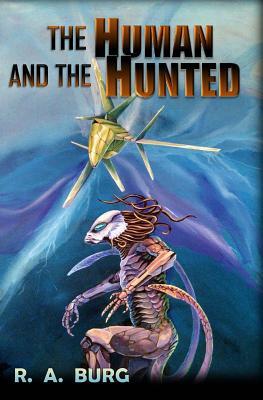 A galaxy wide war between sentient machines rages and Earth is in the crossfire. Oblivious to the deadly peril above, Far Runner and his tribe face their own struggles. An unstable climate forces the group to migrate south and into the sights of a ruthless human foe.

A merciless attack tears Runner away from his family and friends.

A wounded alien cyborg soldier is stranded on Earth. Her views and identity are challenged when she finds herself face to face with a determined human named Far Runner.

As if there weren't enough problems, Moorr, a radioactive four-legged freighter pilot, prospector, and drug smuggler, is displaced by a relic of the war. Lost, he searches for his kin, but finds Earth instead. The defenseless planet is ripe for exploitation.

Earth is in peril. Time is running out...

Yeah, the cover isn't so good, but the story is. Rather than depicting an alien over a galactic backdrop, it would've been better if it had portrayed a scene from the book that included the alien.

The story is told from the viewpoint of Runner (human), En (alien #1), and Moorr (alien #2). Each brings a unique perspective to the story, and Burg gets points for how she handles them. The people of 11,000 BCE strike me as realistic, and the aliens are definitely alien. The humans are in transition from Paleolithic to Mesolithic—given to spirit worship and demonstrating a limited understanding for how the world works. En, the cyborg, is pictured on the cover. "Her" species was saved from extinction by a faction of sentient machines who don't believe that organic life sucks and has to die. Moorr's species are guided by taste and odor, and that's been built into the instrumentation of their spaceships. Moorr expresses surprise that life arose in water on Earth, but I don't recall if it was explained what Moorr expected. And Moorr's biology functions with radioisotopes. Yes, they're radioactive. That sets up an obvious problem when Moorr encounters humans.

Neither Moorr nor En is the omnipotent alien that is often portrayed in non-invasive human-alien encounters. Both aliens stumble in their attempts to understand human language and behavior, not to mention Earth's other native life. En even attempts to dispel Runner's belief that she is a sky spirit. The misunderstandings aren't limited to human-alien interactions, but alien-alien behavior as well. The confusion makes for some light humor when it's harmless, but when it turns serious the tension rises.

A good deal of the novel is centered on En helping Runner find the members of his tribe that were kidnapped by raiders. In the process, Burg showcases how Runner's hunter gatherer tribe's ways are losing out to those that have settled down and built villages. The rise of agriculture and the prospect of a steady food supply has a strong allure towards those who wake up each morning wondering where they'll find their next meal, or if they will at all. While this has some appeal from an anthropological perspective, it slows the pace down. One village is interesting; three becomes a bit tedious.

As for the technicals, the manuscript could've used another round of proofreading. Unfortunately I found plenty of spelling, capitalization, hyphenation, and punctuation errors. At times, Burg is guilty of too much telling and not enough showing. The end of the book had a couple of chapters that would've been better suited for the next novel in the series. It takes away from the feeling of closure for this book. But if these things don't bother you, then ignore me.

Despite these flaws, The Human and the Hunted is a good story and makes for a solid debut. Burg avoids first contact clichés and delivers two interesting aliens and believable prehistoric humans during a time of major sociological change.