The Silver Mask (The Vasini Chronicles #1) by Christian Ellingsen 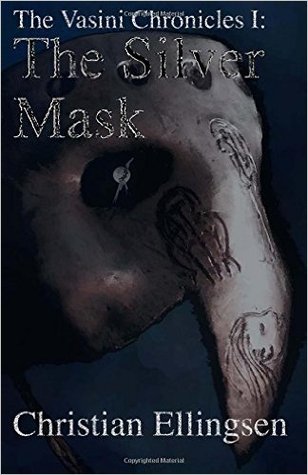 The gods are dead, killed two hundred years ago. With their destruction the moon split apart, the sun dwindled and the land was devastated. Civilisation has re-emerged from the carnage, but twisted creatures still prowl the savage Wildlands between the city-states. In the skies above the city of Vasini, a falling star, a fragment of the dead moon goddess Serindra, heads to earth.

In the Palace district, Dame Vittoria Emerson, darling of the city, has been found dead. As Captain Marcus Fox of the Inspectorate hunts the killer, Dr. Elizabeth Reid searches for the remnants of Serindra determined to make sure the poisonous quicksilver it contains is not used. With Vittoria's death threatening to draw the city's political elite into a war of assassins, Fox and Reid must rush to expose the secrets that lie within Vasini before they tear the city-state apart.

The cover looks like a photograph of a museum piece. While accurate, I don't believe it's enough of a draw to pull in a reader. If this was non-fiction about said mask, maybe it would be sufficient. But even so, the lighting is too dim. The color chosen for the title font is muddled. It should stand out more, like the byline actually does. The typeface is fine. Still, there's so much going on in this novel that the cover should have been a scene from the book rather than the mask, which plays such a minor role in the book that I'm thinking the title should've been something else: City of the Dead Gods? Alchemy of Resurrection?

The chapters are broken into scenes which are occurring simultaneously, rather than devoting a single chapter to a character and his/her POV. It was a little confusing and took a little bit to get used to it and the characters sorted out. However, the opening chapter gave me the impression that a lot was happening on several fronts and thus drew me in. After a while I was able to discern the personalities of the major characters and what roles they played in the city of Vasini.

Ellingsen has invested a great deal of effort in developing the world wherein this story lies, but he doesn't drown you in backstory. It starts out with the familiarity of a mirror Earth and then the differences are sprinkled into the story. The culture of Vasini draws heavily upon the French—many French words frequent the manuscript—but there's a dead pantheon of gods that is complete fiction. There are sub-humans that live among the Vasinians as servants to the wealthy and strange monsters in the woods. And it rains all the time, which might be attributable to the heavily damaged moon in orbit.

To help the reader become more familiar with the city of Vasini, its inhabitants, and surroundings, Ellingsen has placed images of random documents highlighting Vasini's religious, philosophical, and cultural history between chapters. When I could read them, they were a nice touch. Unfortunately, I don't know how to enlarge images embedded in books on my Kindle Fire (just the text) so some of them were illegible.

Captain Fox and his assistant, Sergeant Locke, are the detectives charged with solving Emerson's murder. But as the investigation plays out, they discover that there is much more going on underneath the surface. Not only is Vasini a city that is divided between rich and poor, but the wealthy are bitterly divided into factions (Fishers and Scarlets) that manipulate the masses. Emerson's murder is the spark that sets off retaliatory assassinations on either side of the political divide. Reid and her friend, Catherine, are conducting their own investigation in parallel to Fox and Locke, for their own reasons. They're clearly in over their heads, and it isn't until Reid joins forces with Fox that they're able to see enough pieces of the puzzle to figure out how to solve it.

Christian Ellingsen has created a rich world within The Silver Mask, and despite 400+ pages of exploration, I feel like he's just scratched the surface. He carefully juggles a large cast of characters with ease, and it shows when we're afforded time to read from so many unique points of view (some extensive, some just a pivotal moment). While the mystery seems so Byzantine that Fox and Reid always seem to be three steps behind the antagonists, it only makes the resolution that much more satisfying.

For more information about The Silver Mask, please visit the author's website.
Posted by DED