Too Wyrd by Sarah Buhrman 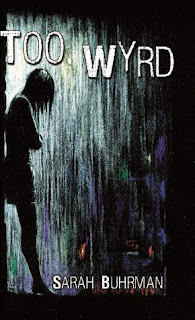 Sarah Buhrman’s Too Wyrd offers a welcome twist on the conventional fantasy protagonist who embarks on a quest.  As the story begins, Nicola Crandall is plucked from the comfort of home by a late-night summons for help, and she readily places her life on hold to combat a supernatural menace. But in this urban fantasy set in Indianapolis, the supernatural exists side by side with real-world problems that take the greatest toll on the most vulnerable.  So in addition to confronting otherworldly abominations, Nicola comes face to face with regular people scrabbling to survive on the fringes of society, and proves to be their staunchest defender. On the whole, her capacity for empathy and inclusiveness is what makes her a compelling hero, more so than her courage or resourcefulness when under threat.

The trouble begins when Nicola’s friend Joseph arrives at her door with worrisome news. Her half-sister Muriel, who has spent time living on the street, has been taken in by a cult that dabbles in magic. Nicola’s help is needed to extricate Muriel both because of Nicola’s skills as a magical practitioner and because one of the cult leaders is her ex, Keith, who is also the father of her child. Nicola and Joseph soon discover that Keith has become involved with very old magic connected to Norse mythology. Nicola and her allies must puzzle out Keith’s intentions and determine the source of his new powers and how they relate to the demons who keep materializing.

In keeping with Nicola’s compassionate nature is the type of magic that she practices. Rather than using magic for aggressive ends, she employs it to assess and affect others’ psychological states. In one scene, Nicola and Joseph use magic to calm an unruly crowd.

I quickly reached for the emotion I wanted: laying back with a cool drink in the shade of an umbrella, with a warm breeze, the soft roar of ocean waves, and the warm colors of a tropical sunset. It was calm, content, and sedate. I sent that feeling into our combined energies and projected it out in a broad arc over the crowd.

The result was subtle but quick, taking hold in a matter of minutes. People who were hyped up and bouncing on their toes, stepped back, rolled their shoulders and relaxed their stance. The crowd stopped its steady press forward and, after a momentary hesitation, began shuffling towards the doors. Instead of the aggressive shoving, people began to display more courtesies, letting people go before them, saying “thank you”.

But make no mistake, Nicola is no weakling. She pushes back hard against anyone who tries to prevent her from attaining her objective, whether it’s an old adversary out for revenge, a police detective trying to connect her with a crime she didn’t commit, or Keith confusing Muriel with glib obfuscations. In the latter instance, Nicola relentlessly interrogates Keith in hopes of getting at the truth.

“What about telling us who’s giving you this ‘truth’ that you’re calling destiny?” I said, pushing our advantage of having surprised him.

Keith frowned and took a step back. “I cannot reveal the name.”

“Because you don’t know?” Joseph asked, pressing forward at my side, “Or because no one would believe you?”

“Or because it’s just you making shit up?” I added. “Must be nice to have your life funded by the people you’ve conned with your line.”

I realized I’d made a mistake in my assumptions when Keith’s shoulders relaxed and he smiled. He shook his head and tsked.

“Nicola,” he drawled out my name. “You’ve grown so bitter and cynical…”

“I’m not bitter,” I continued. “Just because I don’t buy what you’re selling? That’s not bitter, that’s having half a brain.”

But in the end, Nicola is most admirable for the way she treats others.  While tracking down Muriel, she gets a tip that someone who frequents a local soup kitchen might have information. Nicola decides to combine her investigation with providing some much-needed volunteer help at the kitchen.

I talked Mercy into helping us convince some of the Bridge Kids to come with us to the city mission for supper. I knew most of them could use the meal, but the walk was too far for most of them to make the effort. Plus walking meant taking the risk of running into trouble with a capital fist to the gut…

At the mission, a flustered woman thanked us for our help and gave us our assignments… I was put at the end of the food line, helping people with walkers, wheelchairs and kids get all their silverware, food and drinks to their seats. I smiled and chatted up the guests, knowing that half the reason they came to the kitchen was for the small degree of human interaction they got.

Nicola ultimately manages to find the answers she’s looking for and faces down her enemies in a rip-roaring confrontation. However, her quest will continue. According to the author’s blog, she is writing a second installment in the Runespells series. The sequel would benefit greatly from more development of the secondary characters, many of whom are interesting, but lack sufficient depth and backstory. For example, two pivotal characters in Too Wyrd turn out to be not what they initially seemed. But their reversals are, for the most part, inexplicable and leave the reader longing for a greater understanding of their motivations.

At its core, Too Wyrd is an engaging adventure, propelled by a strong, eminently likable lead character. Sarah Buhrman has created an immersive fictional world that skillfully encompasses both the magically sublime and the poignant struggles of everyday people.