The Last Key by Rob Steiner 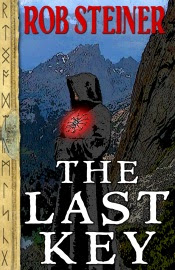 In Rob Steiner's, The Last Key, Raven Labrend is a Novice Dahkshari, an Order of Faith on the continent of Andea. He and his mentor, Jalen Drummond, are tasked with escorting Seala Mesalek, a Duke's daughter and heir, to a peace treaty signing between the kingdoms of Andea and Loquath. The ceremony is to be held at her uncle's castle. It should come as no surprise that the journey is fraught with perilous adventure.

The modern fantasy genre evolved out of fairy tales, legends and mythology. It peaked with Tolkien and his success spawned many imitators, good and bad. As such, we've all been exposed to these stories and are familiar with the elements that go into a high fantasy story: swords and magic, mythical creatures, kings and queens, valiant heroes and fair maidens, and the titanic struggle between good and evil. It would be all too easy for Steiner's story to simply follow that well-worn path and for his characters to fall into two-dimensional stereotypes, but they don't.

Steiner's characters have a measure of depth to them. Raven, is the valiant hero who wants nothing more than to emulate his mentor, Jalen, and to do that he must respect the strict rules of the Dahkshari. But he struggles with a painful childhood memory that drives him to seek justice even if it means bending the rules. Seala is the fair maiden, but she's an educated idealist among the nobility who's unafraid to engage Raven in a debate over the freedom to practice one's Faith. Furthermore, she takes pains to demonstrate to Raven that she's no fragile flower and won't be swayed by a handsome face.

Seala's uncle, Duke Thallan Brael, is cast as evil but he's not a cartoon villain. He was a decorated war hero during the war with Loquath. Sadly, Loquathi soldiers murdered the Duke's wife and children right before his eyes. For him, signing the peace treaty is a big mistake as his heart burns with revenge.

Ferahtu could be considered for the cartoon villain role, but he's more complex than that. His malevolence possesses a dark logic. He helps Brael to see that the end justifies the means. Sacrifices need to be made for the greater good and Ferahtu is all to eager to execute those hard decisions for him. Brael is in possession of one third of the Reaping Key, a powerful source of magic that a millennium ago nearly destroyed the world when one man possessed all three pieces. With Ferahtu's help, he seeks to reclaim the other two pieces and use its power to completely destroy Loquath.

The Last Key is more complicated than a simple quest journey. One of the sub-plots involves the practice of Faith. In Steiner's world, Faith is a form of magical energy; the life essence granted to all living things by the Patrons. It can be used to heal, protect and even destroy. There are various schools of Faith in which people may enlist to learn how to properly harness it. However, there's always someone who doesn't like school. These people are considered heretics and are hunted as criminals. Steiner puts Raven in an awkward situation, as the Novice must decide whether or not he should accept the help of a band of heretics or turn them over to the authorities.

There's plenty of action and at least one fight scene was so vividly choreographed that I had no trouble visualizing it blow by blow. But at no point did I feel like it was overdone. However, the body count is high. Many a character, both major and minor, meets an untimely end. While it makes for a grim story, under the circumstances, it's realistic.

Mythical beasts are used sparingly and to great effect. The Gryphons are noble, yet prideful creatures. The Renders are terrible monsters and Steiner doesn't spare us any details to their grotesque creation or their eating habits.

The Last Key is a great fantasy story. Steiner has crafted a world where politics muddy the boundary between good and evil and forces the characters to find a clear path to solve a world-shattering crisis. His characters rise above stereotypes and engage each other with realistic dialogue that comes naturally to them. And they evolve. Although it is only his first novel, The Last Key clearly exemplifies Steiner's mastery of writing high fantasy. He is one to watch.

Fantasy fans should go buy his book now from Amazon or Smashwords. Read more about Rob and The Last Key at his website.
Posted by DED