This Darkness Light by Michaelbrent Collings 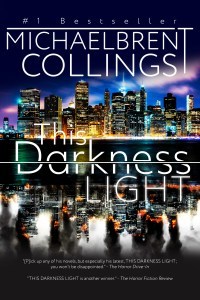 A man with no past, but who holds the future of the world in his hands. A woman who has sworn to protect him, for reasons she does not understand. A killer who must destroy them, or lose all he holds dear. They are running—from each other, from the plague that is killing all around them, from the dark forces beyond their understanding. Running from shadow to shadow. From dark to dark. Hoping to find light. Hoping that this darkness is not all there is. Hoping…because hope is all they have in This Darkness Light.

The book starts out like a Stephen King thriller, like the kind he wrote during the seventies and eighties when he was still hungry. Back before King started writing cinder block-sized epic tomes filled with meandering storylines that wandered off on tangents. It grabs your attention, hints at something terrible just outside your vision, and convinces you to keep reading because you have to know how this is all going to play out. And there's certainly a nod towards King with an all-obscuring fog and strange creatures that lurk within, a la The Mist. Unlike King, Collings is still hungry, and it shows. With only a couple of exceptions, Collings stays focused on the plot and the characters in said plot. There's plenty of action with several fight scenes and car chases. Horror is used to reveal the monsters living within people in a very literal sense.

Collings provides us with three likable protagonists: John (the man with no past), Serafina (the woman sworn to protect him), and Isaiah (the killer). Collings goes in depth with each of them, revealing their pasts and their struggles to hold it together as their worlds come crashing down. Isaiah was the most interesting of the three as he goes from avenging angel to a man caught in an emotional vise, blackmailed to do the dirty work of the antagonists. And he's a priest! I found his life journey from troubled youth to priest to assassin quite intriguing.

The two main antagonists are Dominic and Melville. While the former is in charge, it's the latter that had more depth (as despicable as he is). Dominic seemed too much a cardboard cutout villain. And then there's President Richard Peters, whose emails with Dominic, staff, and foreign leaders opens every chapter. He offers the reader a clue as to how the rest of the world is dealing with the crisis as well as a window into his deteriorating mental state.

After the thriller opening that plays on conspiracy theorists' worst fears of an all-knowing police state, the story morphs into apocalyptic fantasy. Los Angeles is collateral damage as John and Serafina are relentlessly pursued by Dominic's henchmen, Isaiah, and Melville. The disease morphs people into abominations and the fog closes in, yet there always seems to be a car to be found with a full tank of gas and maybe some sandwiches. This is all intentional; the characters are being led to a meeting place in the middle of the country where all will be revealed.

Unfortunately, the manuscript could've used another run through by a proofreader. There were enough mistakes in there that, while it didn't sink the story, proved to be a distraction: "laying down" was used instead of "lying down", an assault shotgun becomes an assault rifle then switches back, a gun becomes a knife, bad dates in email headers, misused punctuation, capitalization (the Bible) and word choice errors.

This Darkness Light is an an action-packed chase across an apocalyptic landscape. While the characters serve familiar roles, Collings embodies (most of) them with enough depth that you can picture who will play them in the movie. Another set of eyes would've been helpful before publication to tidy things up, but it shouldn't stop you from enjoying the ride.

To find out more about This Darkness Light and other works by Michaelbrent Collings, please visit his website.
Posted by DED