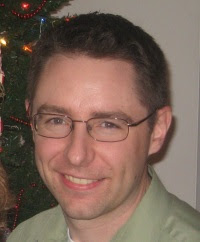 Today we have the pleasure of interviewing Rob Steiner, the author of The Last Key, Aspect of Pale Night, Zervakan, and the Codex Antonius trilogy. His short stories have appeared in Bastion and Orson Scott Card's Intergalactic Medicine Show. As has been posted here previously, Steiner has just concluded the Codex Antonius trilogy with the publication of Muses of the Republic. Now, he's here to talk to us about...everything.

New Podler: Thanks for being here with us today, Rob!

Rob Steiner: I appreciate you having me.

NP: Anyone familiar with your recent work, both in novel and short story form, will notice a certain Roman element to it. Is it safe to say you're a Romanophile?

RS: Am I that obvious, lol? Yes, I’m huge Romanophile. I mean, the Western civilization we know today came right out of Rome, from its languages to its religious customs (the Christian/pagan mashups), to its roads (still used throughout Europe), and even its lawyers (Romans sued the bejesus out of each other). 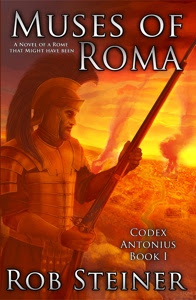 I’m also an American history nut, so the parallels between Rome and the US have always fascinated me—both threw off monarchs to establish democratic republics, albeit ruled by elites; both had a sense of “manifest destiny” to conquer their respective continents; both became cultural melting pots; both transitioned from regional powers to super powers after defeating a long-term rival (Carthage for Rome and the Soviet Union for the US).

Does that mean I think the US republic will one day fall to emperors or that it’ll last as long as Rome? Who knows? The US is still a baby compared to the Roman Empire, which existed in one form or another from the 500s BC until the fall of Constantinople in 1453. The US has a long way to go before it can be considered a match for Rome.

I’m getting into TL;DR territory, so if you’re a budding Romanophile, check out Mike Duncan’s The History of Rome podcast series and anything by Anthony Everitt.

NP: For the people out there who don't know anything about the Codex Antonius series, otherwise known as the Muses books, what would you like to say to introduce them to the series? 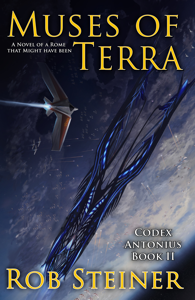 But if you need more than that: Mark Antony routs Octavius Caesar at the Battle of Actium in 31 BC and becomes the sole consul of the Roman Republic. He ushers in an unimaginable golden age, and within 1,000 years, Rome has not only conquered the world but spawned an interstellar civilization.

By the time Muses of Roma starts, Rome has declined over recent decades, and rival worlds have emerged. But it’s still a powerhouse that no nation is crazy enough to take on alone.

NP: What was your inspiration for writing the series?

RS: Since I’m a history nut, it stands to reason that I also love alternate history. Harry Turtledove got me going with Guns of the South, where time travelers show up during the US Civil War, give the Confederacy AK-47s, and enable them to win the war. In addition to his Worldwar series (aliens invade Earth during World War II), his books showed me that sci-fi and alternate history can coexist and make for some exciting stories.

For me, the Roman Empire + space opera = awesome. So I went with it.

But all good alternate history needs that "what if" moment where things take off in a different direction. For my Muses series, I wanted Rome to go from a Mediterranean empire to an interstellar one within a thousand years. That’s an awfully short time period for such a drastic advance, so I figured they’d need help. I wanted that help to be alien, but I didn’t want your standard gray alien whispering in Mark Antony’s ear from behind the curtains. I wanted something different. 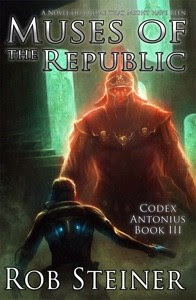 I once read in Bill Bryson’s A Short History of Nearly Everything that 80% of all life on the planet Earth is bacteria. Humans usually fancy themselves at the top of the food chain, but Bryson said that humans exist on this planet because the bacteria allow it. If they turned on us, there wouldn’t be a damn thing we could do.

The way he described bacteria made them sound almost…sentient.

What if a sentient virus, which had existed for millions of years and infected dozens of intelligent species, found its way to Earth and Mark Antony, infected him, and gave him all the knowledge it had accumulated? That sure would kickstart a Roman golden age, to say the least.

But all that knowledge isn’t free, and there’s a terrible price for it. The Codex Antonius series is about Marcus Antonius Cordus, Mark Antony’s distant ancestor, who learns the terrible price and fights to free Rome—and humanity—from Muse enslavement.

NP: You've covered a lot of ground in the series, and many years have passed between books. In "The Vestal" (Bastion November 2014 issue), we got to see Kaeso (my favorite character in the series) back in his Umbra Corps days. Any chance that we'll see more stories from his early days or between the novels?

RS: So to give your readers a quick backstory: Umbra Corps is a super-secret spy agency for the Roman rival world Libertus. Libertus is small and doesn’t have a huge star fleet like Rome, so they use the Umbra Corps with its almost magical technology to infiltrate any government or crime syndicate. Their philosphy is: Why maintain a huge star fleet when you can stop any threat in its planning stages through targeted assassination or sabotage? Umbra Corps is why little Libertus has remained free in an interstellar neighborhood dominated by Rome and petty warlords looking for glory.

Of course, Umbra Corps’ success comes from its own deal with the devil, which I won’t spoil here.

By the time of Muses of Roma, Kaeso Aemilus is a former Umbra Corps agent who used to work in Rome, but was blackballed and now runs his own cargo ship crewed by outcasts like himself.

I’d love to write about Kaeso’s Umbra Corps days, because he did things that would make James Bond wet his pants. However, I want to avoid the Star Wars prequels trap. The answers to the mysteries that Kaeso fought to learn in his Umbra Corps days are revealed in the Codex Antonius series. I need to figure out new stories (and/or novels) where those mysteries aren’t central to the plot (which would bore Codex Antonius readers who know how it all ends), but at the same time keep the Muses as the main bad guys (because they are the reason this alternate history exists, after all). Once I figure out another story like that, I will write it. 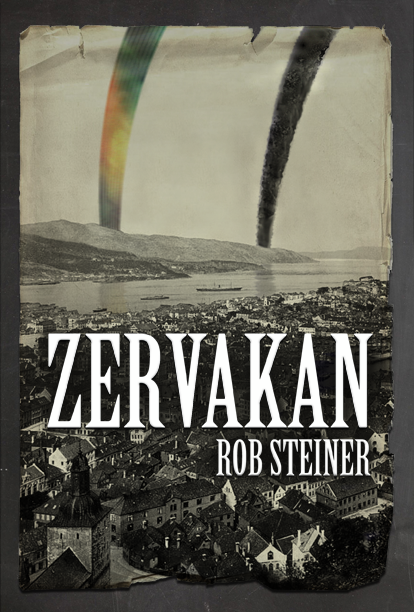 NP: In Zervakan, you gave us a world where magic and steampunk era technology co-exist, albeit not peacefully. The main character, Taran, tried to bridge the two worlds but was viewed as a pariah. What was your inspiration for writing it?

RS: Zervakan was inspired by my personal belief that science and religion are two sides of the same coin: they both attempt to describe different aspects of reality. And I wanted to wrap that notion up in an exciting fantasy adventure.

Science and religion are always in flux anyway, never settled and constantly reinterpreted. For some religions, the belief that the Earth was the center of the universe was sacrosanct; but that belief was reinterpreted in face of irrefutable evidence to the contrary. And up until the 1870s, the best minds in science thought it was pure fantasy for “invisible” germs to cause contagious diseases.

I often wonder if people a hundred years from now will look back on today’s “settled” scientific and religious principles and laugh at our naiveté.

NP: Do you have any plans on returning to that world?

RS: When I outlined the book, I intended it as a standalone novel. But as I wrote it, I decided to throw in some plot threads that could lead to future books. I think the novel still holds up well as a standalone, though, so I don’t have any plans for future volumes at this point.

But if it starts selling like gangbusters, I could be persuaded otherwise. ;-)

NP: Now that the Codex Antonius trilogy is complete, do you have anything on the drawing board, or are your creative batteries re-charging?

RS: I just completed a new fantasy novel based on the characters in the two short stories I published on Orson Scott Card’s Intergalactic Medicine Show. The book and stories are about Natta Magus, a wizard from an alternate 21st century where magic powers the world. He gets stranded in 6 BC Rome (go figure, eh?) by his former mentor and friend and is desperate to find out why. It’s in third draft mode, and I hope to release it in early fall. I’d encourage your readers to sign up for my New Releases mailing list to be among the first to know when it comes out.

NP: That's going to do it for me. If anyone in the audience has any questions for Rob, please post them in the comments.

Thanks again for joining us today, Rob. I suddenly feel the need to stock up on Purell and Lysol.

RS: That would be wise. ;-) And thank you for this opportunity.

NP: To learn more about the Codex Antonius series or any of Rob's other works, please visit his website.
Posted by DED