No Dogs in Philly by Andy Futuro 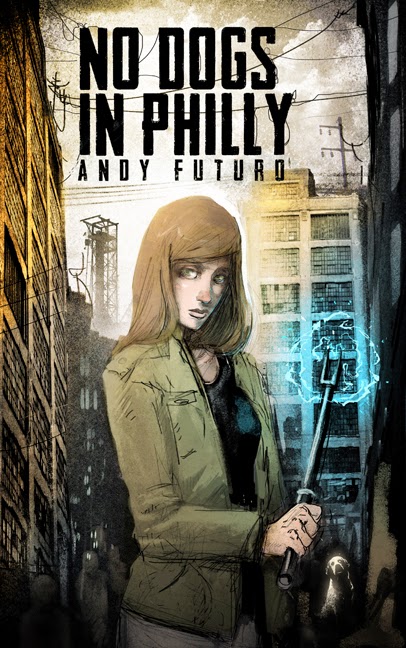 Philadelphia. Elzi on every corner, cops just itching to crack a skull, and the Gaespora lordin' it up in their high towers while the rest of the filth dribbled down the sewer. Saru had a way out. All she had to do was find the girl, one skinny stray with blue, blue eyes—bluer than anyone had ever seen—and ten million fat bucks were hers. Except someone was killing blue-eyed girls, and they were A-list, major-league, cold-sweat effective. And something about the end of all existence if she failed.

Don't let the doe-eyed woman on the cover fool you. That's Saru. She'll use that cattle prod on you if you mess with her. While not evident from the cover, she's enhanced with all the doodads that cyberpunk fans would expect of a near future sci-fi heroine. She's connected to the Net 24/7; has a pistol named "Betty" up her sleeve ready to go when adrenaline, pulse rate, and subconscious thought reach a critical threshold; and everything's subdermal. But just as her soft exterior belies the bad ass that she is, her gender hides the fact that she's more macho than most men, certainly the other male characters in the story. She could be Mike Hammer's granddaughter, though with less rage and more cynicism.

I get that she has to be tough. Her world is full of creeps and creepy things. But the hard-boiled persona has its limitations. While Hammer was out for justice, Saru only seems to be out for herself. People can sympathize with vigilantes, not so much the obnoxious brats just looking for a payday. It takes a lot of death before any kind of humanity breaks through the concrete barrier surrounding her heart. Even when it does, I wasn't convinced that she was going to carry through on her promise to set things right.

Futuro's Philadelphia is a complex place with enhanced humans, aliens, and monsters. The aliens and monsters would be right at home in Lovecraft's universe. But whereas Lovecraft's unthinkable creations lurked in the shadows and faraway places, Futuro's creations are out in the open. Considering the obvious menace that some of them pose, I'm surprised that there wasn't more panic among the populace. The elzi seem to be former people that were exposed to dark forces which devolved them into sub-human animals with tech sticking out of their bodies and great appetite (hence the book's title). Sure, there are even worse things lurking underground, but the elzi are out on Broad Street in broad daylight. The city seems to function; why not round them up or put them down?

Futuro is at his best when he taps into that Lovecraft vibe. He reaches out to the infinite and shows how it overwhelms a human mind. There's the plea from a desperate soul that we have to hope that the old, hungry god ignores our world. But it's the elements of indescribable horrors lurking in the dark that do unspeakable things that really fires things up. My favorite part was when Ria took shelter from the rain in a subway tunnel. It was already a tense scene as she sat with a few homeless people around a trash fire while dozens of satiated elzi slept nearby. Will they stay asleep? What if one of them needs a midnight snack? And then there's a rumble that wakes up the elzi, and they scatter. The people start to panic. What could drive an elzi to run away? Then Futuro reveals what that thing is.

Unfortunately, my experience was marred by comma problems (missing or too many) and run on sentences. Sometimes it seemed as if Futuro tried to cram as many adjectives and phrases as possible. These two sentences lack any form of punctuation:

We live as we can can as thoughts within your kind and through thought we drive action and with action we bring your world closer to our own.

She could pound a liter of vodka and walk a line and thread a needle and she remembered exactly what had happened.

Here's an example of a sentence that goes on far too long given its limited punctuation:

She'd tried wearing sunglasses to complete her disguise, but with the clouds and the dark she couldn't see shit, kept stepping in it and glass and syringes and tripping and potholes and the last time she'd had a condom dragging from her heel for about four blocks until the cashier at the liquor store pointed it out by yelling in his angry foreigner language.

While there are more examples, it's not like the whole book is like this. Most of the time, Futuro gets it right. If he had hired a proofreader, I believe that the manuscript would've been much cleaner. If commas and long sentences like these don't bother you, then don't sweat it. Just enjoy the story.

While it might seem from my complaints about grammar and the unsympathetic protagonist that I didn't like the story, that isn't the case. I really enjoyed it. Futuro nicely blends cyberpunk and Lovecraftian horror together in a bleak, near future Philadelphia. While his protagonist is about as warm and cuddly as 80 grit sandpaper, she adds a hard-boiled detective element into the mix that works well given the story's setting and plot.