The Somniscient by Richard Levesque 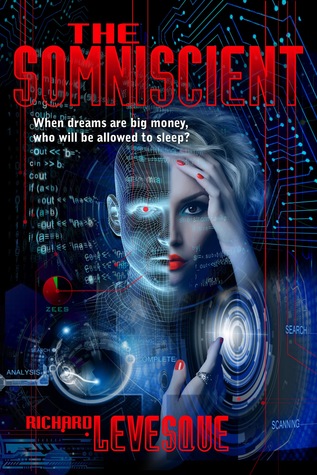 When reformed dream hacker Nix Nighthawk's sleep chip malfunctions, he is forced to seek help from a world he is trying to avoid—his old friends in the pirate dream network. But that world has changed, and Nix soon finds himself at the center of a complex plot to overthrow the vast corporation that controls every aspect of society. Betrayed by his lover, his friends, and even the technology that defines him, he has to choose: go back to living his safe and controlled existence, or be the hero and join forces with the revolutionary known only as The Somniscient.

My first thought when I read the title was, "What the heck does 'somniscient' mean?" It's not listed in the dictionary, so I tried to break it down into its parts.

somni-: a combining form meaning “sleep”, used in the formation of compound words.

omniscient: having complete or unlimited knowledge, awareness, or understanding; perceiving all things.

When I put both parts together, I get someone that has complete knowledge of the sleeping world. It's the screen name of one of the characters, a dream hacker, in the story. But I'm getting ahead of myself.

Levesque has created a world that uses sleep as currency. Everyone needs to sleep, so people earn "Zs" in order to sleep. You also use the Zs to buy things, pay for services, food, water, filtered air. The story takes place in the 22nd century. There's been some geological and economic upheaval that has brought civilization to the brink of collapse. One tech company, enLIGHTen, has pretty much all the power as it was their idea to use sleep as currency. Their device, the Loop, is surgically attached behind one's ear and connects people to the internet 24/7. Imagine seeing your Facebook feed updating all day and night. It also runs the sleep app which prohibits people from sleeping if they don't have enough Zs in their accounts.

Being someone who prizes sleep more than money, I thought that this was a horrific idea, and I would think many others would too. But if you want to be part of society and enjoy the comforts of civilization, you have to get one. I would be one of the "unLooped", the people who live on the margins of society. They can sleep all they want, but don't have jobs, homes, food, or anything else. Nix gets caught up in the rat race. He's burned out trying to earn enough Zs so he can sleep, but paying for rent, utilities, and other bills comes first. He can never seem to get ahead. He's trapped, working for the very company that makes the Loop. He literally becomes an indentured servant.

When people do get to sleep, they can buy dreams that they run on their sleep app. But just as people buy apps that their phone makers don't want them to today, people in this future L.A. buy unsanctioned dreams. Unsanctioned dreams can have malware hidden in them that can screw up one's Loop or steal their Zs.

Most of this is explained in the backstory that Levesque pours on the reader at the beginning of the book. It takes a while for the story get moving as we're introduced to Nix and the world he lives in. While it's a fascinating concept to have sleep as currency, I couldn't help but think that these people were idiots for agreeing to this system, so it took me a while to become sympathetic to their plight. But it isn't Nix's fault; he was born into this world. As we come to feel sorry for his lot in life, something happens to him, and the story's pace picks up. Nix is now on the run, and we're rooting for him to succeed.

But one-third of the way into the book, just when we get hooked, Nix disappears from the narrative. The story resumes several years later with another character in charge of the narrative. I was completely thrown by this abrupt change. I felt as if I was starting over. It took me quite a while to start feeling sympathetic for this new character—she's a trophy wife—after getting invested in Nix, and the pace of the story slowed to a crawl while she reflected on her predicament in life. The story eventually returns to Nix—and the pace picks back up—but it isn't until the second half of the book.

Another interesting avenue Levesque explores is gender identity. Because the Loop digitizes thought, one can, in essence, upload one's personality to a host computer and then implant it into another Loop. Through this process, a man and a woman are forced to share a body. Each takes turns controlling the body. The visiting personality gets to experience life as a different gender, complete with different sensations that they're not used to. The host personality gets to experience the visiting person's feelings and actions after ceding control of their body, even when they run counter to their own.

As for the technicals, I only found a few typos. As far as I'm concerned, that's professional quality editing.

In The Somniscient, Richard Levesque has created a unique world where sleep is currency and certainly not free. While it is an intriguing concept and Levesque provides the framework and world building for such a society to exist, the introductory backstory weighs the story down. The characters that provide the narrative are so self-absorbed with their respective plights that they slow down the story, and the sudden switch from one to the other nearly derails it. Still, The Somniscient makes for an entertaining read as Levesque uniquely explores gender identity, the "have versus have not" divide, and the extent our digitally obsessed culture will go to get its internet fix.

For more information about The Somniscient, please visit the author's website.
Posted by DED