The Interview by Damian Bruce 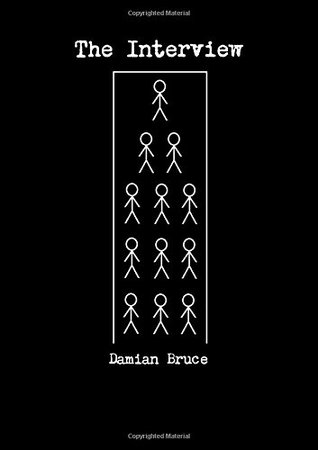 In a city racked by poverty and discontent, twelve people arrive for an interview with the all powerful Frontline Corporation. The successful candidate will trade hunger and hardship for a life of luxury and excess. However, it quickly becomes clear that the interview is nothing like they expected. Who will survive the brutal waiting game that unfolds? To what lengths are the candidates willing to go to secure the job? And what secrets are they hiding from one another?

Let me deal with the obvious: This is a terrible book cover. If I saw this in a book store or it came up on one of my recommendation feeds, I'd chuckle and move on (fortunately, I don't look at the covers for submissions). And that's too bad, because Bruce has written a good story. But this cover does nothing to support the blurb or hint at the content within. Please, Mr. Bruce, check out our list of book cover designers and invest in your cover.

Now onto the review.

There are two threads running through this book: the narrative of the interview and backstory chapters. The chapters alternate. First we have Edgar's narrative of the interview as it happens, and then the next chapter details the backstory of the interviewee that was just eliminated. But only the reader is aware of these backstories; Edgar is ignorant, free to reflect on his insecurity and low self-esteem. Tension is low at first, but as the more timid interviewees give up and depart, people come to realize that their odds of winning have improved and tensions rise. The longer the interview carries on, the more desperate everyone becomes.

One prize not mentioned in the blurb is that the winner of the interview will get to meet the "company alpha", Elise Villette, who has succeeded her recently deceased father as leader of the Frontline Corportation. Meeting Villette is more than just a formality; it becomes the goal of those involved.

We learn through the first few character backstory chapters about the background of this city-state that Frontline controls. Initially, I felt that these chapters were a distraction from the interview narrative. But over time, as more interesting characters were eliminated, they revealed that more is going on in this city than plain vanilla oppression. A revolt is brewing, born from the ashes of a failed one years ago. But the old leaders have split into two factions. One believes that the security forces can be defeated if the seemingly omniscient leader of Frontline is assassinated.

The other faction believes that peace is the answer. This faction is aware of an assassin but not his/her identity. The company already provides essential, albeit meager, services, and this infrastructure needs to be preserved. Villette just needs to change her tack from the oppressive stance of her father to benevolent leader. The peaceful faction attempts to contact interviewees to persuade them of the importance of their mission. They even try to get put their own people in place for the interview.

While I only found a handful of typos, comma punctuation was lacking. The book needs a lot more commas. They were left out of dialogue the majority of the times. Too often a sentence like this: "Where are you going, Harry?" was written as "Where are you going Harry?" If that doesn't bother you, then ignore me.

The Interview proves the adage that we shouldn't judge a book by its cover, but I know people will, and that's a shame. This is a well-crafted story with an assortment of characters with hidden agendas. Whether their goal is to escape poverty or transform the city from the top, the stakes couldn't be higher for the twelve assembled. What starts out as a simple dystopia gradually evolves into an intriguing game of "guess the assassin." Just when I thought I had it figured out, Bruce surprised me. So if you think you've got this book figured out from the cover, you're in for a pleasant surprise.

For more information about The Interview, please visit its page on Goodreads.
Posted by DED