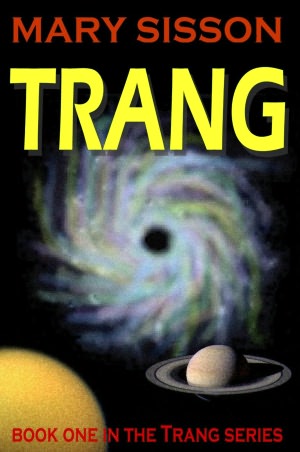 In Trang, by Mary Sisson, a missing satellite orbiting Saturn leads to the discovery of a mysterious portal. After several years of communicating with the aliens residing in a space station on the other side, a diplomatic mission is sent through the portal. The expeditionary force consists of a diplomat, the titular character Philippe Trang, and a squad of Special Forces, headed by the feisty Shanti, to provide security. Once at the station, humanity's representatives meet other alien races and eventually get pulled into a crisis that threatens to start an interstellar war.

Trang struck me as a throwback to 60's sci-fi. In particular, it runs in the vein of soft or social science fiction. While the aliens are quite "alien" in appearance, they are intrinsically civilized in a familiar way. The technology comes across as magical, with nary an explanation as to how it works. It just does. Action is light as dialogue carries the story. While this will be a turn off to some, particularly the hard sci-fi crowd, they'd be missing out on Sisson's strengths.

Sisson's strengths lie in characterization and dialogue. All of her characters, even the aliens, have distinct traits which make them unique. Trang is a borderline effeminate, elitist bureaucrat who can't stand the grunts that have been assigned to the mission. Their uncouth behavior, as compared to the Union Police he normally works with, rankles him. Shanti is the no nonsense CO of the Special Forces unit on the station. She drops F bombs with abandon, but is 100% focused on her job and has the complete respect of those under her command. Sisson invests as much time resolving their conflict as she does establishing relationships between the humans and the aliens.

This is a dialogue heavy novel, and the conversations feel authentic. As mentioned above, Trang is a virtual minefield of F bombs and other profanity. However, at no point did I feel it was gratuitous. In fact, there was a fair amount of barracks humor. On the non-profane side, Trang speaks the language of diplomacy with ease and genuine amiability. Communications with the aliens is handled effectively: the years between first contact and the meeting on the station were spent programming a translator, but it isn't perfect. Every so often the words "cannot translate" pop in to highlight its shortcomings.

As for the technicals, there are plenty of typos and typesetting errors. A second set of eyes would've cleared these up. Also, the story also runs a bit long. While 370+ pages isn't necessarily a lot, I feel that the story would've been much tighter had it been about 20-25% shorter. There are whole sections (the discovery of the portal, the hate mail from Trang's ex-girlfriend) that didn't add to the story. An editor would've been able to help cut out the filler.

Trang is a clever return to the social sci-fi days of yesteryear. Convincing dialogue and strong characterization drive the story, with action forced to ride in the back of the bus. While the story could use some tidying up and a tighter fit, it's still appealing enough to give it a try.

Trang is available in various formats through the author's website. Sample chapters available too.

Update 7/25/12: Sisson has informed me that the book has been run through an editor since this review.
Posted by DED

Thanks so much for the review!

Sounds interesting. I'm reading my first indie novel now and feel that an editor would have also been a bonus for much the same reasons you point out above. I am intrigued by the story.

That's a common problem in indie publishing. Too many authors aren't willing to cough up the money to hire an editor to proofread their work. They forget that traditionally published authors rely on editors too, but their publishers cover the cost.

Every indie author should hire an editor. The second set of eyes is invaluable. We all make mistakes, but we don't catch them all.

Oh and be sure to check out the other book review blogs listed down the right hand side of the page. Most of them have a higher throughput of book reviews than we do.